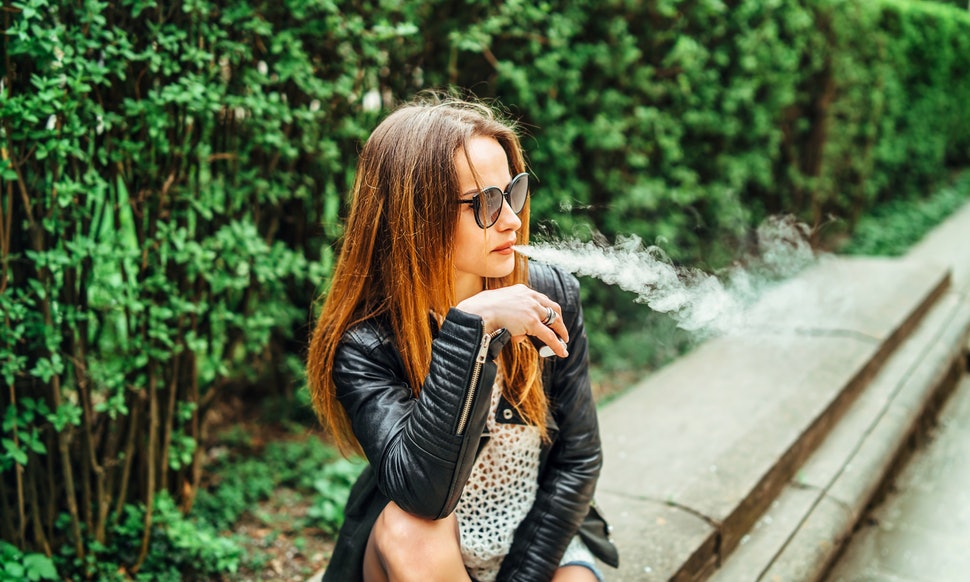 Vaping means using an e-cigarette. It has a vaporizer, a battery and the e-liquid of your choosing. It’s sometimes used as a new form of smoking that’s entirely different to smoking tobacco from a cigarette. It’s quite a different thing though and, as such, has some pros and cons. Some of these pros and cons have greater relevance to a woman; others are broadly applicable.

Let’s see what they are and how they stack up.

Whether your vaping in the UK or elsewhere, the visible health benefits are easily observed either by yourself, friends or onlookers. When you make the switch from being a smoker to a vaper, you might enjoy these benefits:

Firstly, the smelly smoke from cigarettes is no longer there. This means, your mouth won’t taste like an ashtray (whatever that tastes like), your hair will smell like the shampoo and conditioner fragrance instead, and your real perfume can be appreciated once again!

Secondly, the skin irritation that is a side effect of smoking for many smokers is usually completely gone. This is a reaction to the thousands of chemicals in the typical cigarette that aren’t present when vaping.

Thirdly, that raspy cough that seems like you’re continually coming down with something when it’s just as a result of smoking, disappears in a few days/weeks.

You’ll feel more socially accepted when you vape instead of smoke. While many of the same places ban both in public now, it’s still more acceptable for a woman (or a man, really) to vape than to smoke. This is because it doesn’t create an unpleasant odour or swirl of smoke that says, “stay away”!

If you’re coming off smoking, then the smoker’s cough from long-term smoking will go away given enough time to do so. With that gone, it’s possible to build up your stamina by walking and then jogging around the park or joining a gym. Your lung capacity will have increased because you’re not holding it back any longer. Losing weight will be less of an issue too.

If you are watching what you eat and drink, counting calories or working out to avoid going up one or more dress sizes, the fun thing with vaping is that there’s a myriad of tasty flavours to try out. These can be enjoyed between meals without needing to blow your calorie allowance for the day while doing so.

The flavours are so varied to match the interests of people who vape. They include about every type of fruit you can think of, chocolate for that rich taste, and even bubble-gum! The brand names are even fun like Pukka Juice, Evil Cloud, and Asmodus (a US brand exclusively offered by Grey Haze). You can check out the latest flavours and vaporisers at greyhaze.co.uk which stocks all the best vaping UK brands with photos and background information on each product too.

Vaping kits are neat and tidy. They’re colourfully packaged and don’t leak anywhere. Easy to carry in a handbag to work while being discrete, ready for a vaping break mid-morning with your coffee outside the office building.

There’s no ash falling to the ground when vaping. No need for an ashtray or to empty it when it gets too unsightly either. Empty cigarette packets, cig butts and other reminders that a smoker was here are not part of a vapers’ life. As a woman, you can be discrete about your vaping habit and not leave tell-tale signs of it wherever you go.

Pro: Choose How Much Nicotine to Use in E-Cigs

When buying an e-cigarette, you can choose the amount of nicotine based on what product you select. For anyone wishing to gradually wean themselves off an addiction to nicotine or just wanting to reduce their dependence, vaping is an excellent way to do so.

Look at when you tended to smoke. Have a vape ready to go that offers a smaller hit of nicotine and some pleasing flavour. Often, this provides enough stress release to not need to do more. The improvement in self-control is useful for people who are wanting to be healthier.

Pro: No Walking Fire Hazard in Your Mouth or Hand!

One of the worst things about smoking is that the ash can fall onto something flammable and cause a fire. In some cases, houses have burned down, with the fire thought to have been ignited by a cigarette that was either left unattended or the smoker fell asleep with the cigarette in their hand and it dropped to the carpet.

There’s almost no risk of fire when vaping. The vaporiser equipment is only there to vaporise the nicotine; no ash or other fire-generating remnants are created as a result of vaping. It’s far safer to vape at home when you’re tired and may fall asleep.

Con: Dried Out Your Mouth When Vaping Regularly

When vaping quite often, one noticeable side effect is that your mouth will get drier than it usually does day-to-day. This isn’t a major issue – just drink a glass of water after you’ve vaped to redress the balance. You don’t really get seriously dehydrated when experiencing dry mouth, but it’s a good idea to drink enough water every day anyway.

There are many different flavours of e-juice available to try. The better ones are organic, and those products can be purchased in the UK now too.

Different additives are included in flavours marketed around the world. The most common are Vegetable Glycerine (VG) and Propylene Glycol (PG). It’s possible that you’re allergic to one of these two. If you have a problem with a flavouring that includes both VG and PG, then it’s possible to find a product that only includes one of them, but not both. This way, you can isolate which is causing an allergic reaction and know which to avoid. Most people are fine though.

Many e-cigarettes do include nicotine. While this isn’t as harmful as tobacco, it’s best to limit your intake of nicotine where you can. As mentioned in the Pro section, nicotine consumption can be controlled by choosing products that have different levels to adjust your intake, not just with how often you vape but what you vape. This puts the control back in the hands of the consumer.

You cannot do much about any negativity associated with vaping. Sometimes it’s through a lack of understanding by people who’ve never vaped. Other times, it’s people assuming it’s the same as smoking and not understanding that there’s a difference. Where appropriate, this is an opportunity to educate rather than get into a dispute.

There are far more pros than cons with vaping. It’s become popular because it’s healthier than some other alternatives, it has a huge variety of e-juice flavours and it’s more convenient. The lack of mess created and the fact that it’s safer is leading its growth in popularity. When you want to smoke something, it’s far more socially acceptable as a woman to vape than to light up too. Now you just have to discover what your favourite flavour is.